November is long-term care awareness month.  Here are five things you should know about LTC. 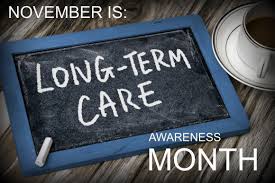 With 10,000 people turning 65 every single day in America until around year 2030, there are varying statistics regarding the need for long-term care floating around out there—some as high as 75%.  In late August, Morningstar put together their 2018 updated statistics, placing the percentage of people 65 or older who will need long-term care at 52%, the majority female.

If you hear the words “long-term care” and automatically think “nursing home,” you should know that long-term care encompasses a wide range of options and a progression of choices. The most self-sufficient seniors might live in independent retirement living facilities, while assisted living often adds medication management, daily personal care, meals and housekeeping. Continuing care retirement communities (CCRCs) offer a tiered approach so that seniors can transition on site as they require more services. Adult foster care is available in private homes run by trained caregivers—there are even special homes designated for military veterans with chronic medical conditions overseen by the Dept. of Veterans Affairs.

Of course, nursing homes are also part of the spectrum, offering 24-hour supervision, nursing care, help with daily living activities and three meals per day. Secured memory care units, which are more expensive, are often located within nursing homes to provide a safe but more homey environment for people suffering with Alzheimer’s or dementia. Skilled nursing facilities (SNF) are not identical to nursing homes—they often staff doctors and nurses around the clock and offer physical rehabilitation services. People in these facilities may be bedridden, need two people move them, and require dialysis or other intensive treatments.

According to Genworth’s 15th Annual Cost of Care Survey, the “blended annual median cost of long-term care support services has increased an average of 3% from 2017 to 2018, with some care categories exceeding two to three times the 2.1% U.S. inflation rate.”

When it comes to helping people solve the problem of potentially needing long-term care, hybrid whole life, hybrid indexed universal life (IUL) and hybrid annuities have been more popular than traditional long-term care policies, and they are becoming more popular every year. 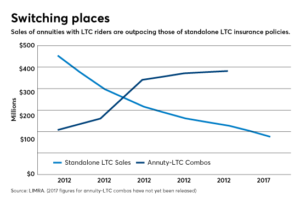 Demand for LTC coverage is actually on the rise, but dollars are flowing into other types of contracts.  LIMRA reports that annuity-LTC hybrids surpassed individual LTC policies in sales for the first time in 2014.

The reasons for the rise in popularity have to do with a combination of factors, including the rising cost of standalone LTC policies as well as the attractive features of some new hybrid annuities and life policies.