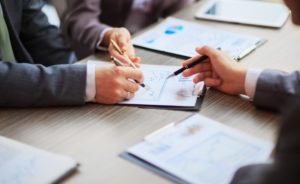 As 2019 begins, two new surveys suggest that both advisors and economists aren’t so optimistic about where the economy is headed.

This kind of insight from industry experts is useful, but especially to those who are approaching retirement. Knowing what pundits and advisors believe could lie ahead, and exploring what action can be taken in case of any untimely disruptions to their portfolios, is critical to those within five to 10 years of retirement.

So, what do advisors and economists see when they look ahead? They see the shakiness of 2018 leading to a potentially rocky 2019.

While your 401(k) or retirement plan surely felt the impact of the volatile 2018 stock market, recapping the year can show us just how volatile it was and how we got to our current sense of unease.

Writing in his financial blog, A Wealth of Common Sense, Ben Carlson, CFA, compares 2018 to 2017 with alarming clarity. Among the findings he recaps:

Carlson says, “Looking at the differences in the stock market between 2017 and 2018 can be instructive because it shows the Dr. Jekyll and Mr. Hyde nature of investing in equities.”

Looking into the Future

InvestmentNews surveyed 371 advisors for the year-end survey it just released. Among other questions, the respondents were asked to name the biggest issue facing the financial advice industry in the year ahead.

The highest number of respondents (28%) ranked uncertainty over the U.S. political system as their top concern.

The survey found that another source of advisors’ concern over the nation’s economic prospects is geopolitical uncertainty, which respondents believe could slow the U.S. economy in the year ahead.

Our ongoing trade dispute with China, which is America’s largest trading partner, influenced the 38% of polled advisors who said they believe the economy will decline in 2019. In the survey 23% expect the economy to be on par with 2018 and 27% believe it could improve slightly.

When they were asked if they anticipated a recession in the next three years, a majority of advisors (68%) answered “yes.” Of those who are predicting recession, 28% believe it will begin in the second half of 2019. A larger share, 44%, see it occurring some time in 2020, leading up to the next presidential election.

One advisor summed up how he shares his market view with his clients: “At year-end meetings with clients, I have been expressing concerns about what I’m seeing, and I’m setting the bar kind of low because we’re overdue for a market correction.”

The Wall Street Journal recently conducted its first monthly poll of economists for 2019. The poll found that economists believe there is a 25% chance that our economy will enter a recession within the next 12 months. It’s the highest percentage in seven years and almost double last year’s figure of just 13%.

And the year 2020 may have rough times ahead. In the survey, 56.6% of the economists predict a downturn at the start of the election year.

No matter when the expected recession begins, a substantial 84% of the forecasters see a worsening U.S. economy. While this is equal to their December sentiment, it’s up sharply from 53% who felt this way as recently as October.

As far as a recession trigger point, economists are concerned about a shock to the market that could result from an escalation in the trade war. In turn, that could result in both businesses and consumers reigning in their spending, further stressing the economy.

Protecting Yourself from an Uncertain Horizon

Investors who are within five to 10 years of retirement should consider how these economic possibilities could impact their financial future.

It might be time to consider taking a more defensive position with your nest egg. No one wants to reach the cusp of retirement trying to play catch-up with their asset recovery.

What new strategies might you consider that would help you protect yourself from stock market and economic uncertainty? Consider seeking guidance from a financial professional. They can help you explore different options for asset protection, lifelong retirement income, tax burden mitigation, and other financial security-bolstering strategies.

The end goal? To help you start retired life on the right foot and build confidence in your ability to achieve your ideal retirement lifestyle. If you are ready for help, financial professionals at  HFHanes.com  can assist you.

Get in touch with an independent financial professional at HFHanes.com to explore some potential income and wealth protection strategies for you. And should you have any questions, please call us at H.F. Hanes & Associates at 480-607-1346 or 888-416-(LIFE).